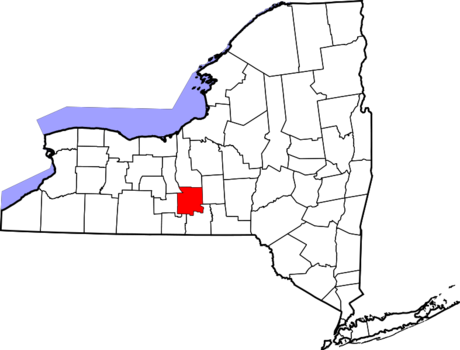 Tompkins County is located in the heart of the beautiful Finger Lakes. It has a dramtically varied topography, with the southern area dominated by rugged hills. The highest, Connecticut Hill, reaches over 2,000 feet. The northern part of the county has gentler terrain and more fertile soils. About one-quarter of the county enjoys high quality agricultural soils.

The county spreads across 476 square miles, and is composed of sixteen municipalities, nine towns, and the city of Ithaca. The State of New York officially formed Tompkins County in 1817, naming it for Daniel D. Tompkins, a former New York governor and at that time vice president of the United States.

The city of Ithaca is the seat of the county. It is a unique and lively town, lying on the southern end of Cayuga Lake, the longest of the eleven Finger Lakes. Ithaca is surrounded by numerous gorges and 150 waterfalls, including Taughannock Falls in Ulysses, which at 215 feet is higher than the vertical drop at Niagara Falls. Downtown Ithaca features one of the only pedestrian malls in the country as well as numerous restaurants, including the famous Moosewood vegetarian restaurant.

Tompkins has a population of approximately 100,000 people, and is home to Cornell University, Ithaca College, and Tompkins Cortland Community College. These three higher education institutions are major intellectual and economic drivers locally. Agriculture also plays a key role in the county’s economy, and the growing number of regional farms and vineyards that dot our lakes’ shores reflect broad support for the local food movement; not surprisingly, given this support, the local farmers market in Ithaca has gained national recognition. The county is also home to a vibrant arts and music scene.